Wrong Fuel London has a strong presence in Bromley. We cover the entirety of the BR, SE and surrounding postcodes. We can get out to you quickly and efficiently. Here are some examples of wrong fuel Bromley jobs we’ve done to show our coverage:

We once did a fuel drain on a Peugeot 308 at the Anerley Business Centre. The customer had put the wrong fuel in the car (petrol in diesel) and we came out to drain and flush the tank and engine to get the vehicle going again. Being a very simple vehicle, the 308 was up and running again within 30 minutes of arrival on scene.

A few weeks back a desperate cutomer called us from a parking lot right near Beckenham Junction. She had put the wrong fuel (petrol) in her diesel Renault Espace. The car started to splutter as she was driving and she managed to pull in to the parking space. Fortunately our engineer had just completed a job on the Beckenham Road and was only 5 minutes away. We arrived and drained the car and had her on her way within 35minutes of receiving her call.

Quite a while ago a certain young man decided to fill up his father’s Volvo XC90 with petrol on his way to a secret liaison at the Bickley Manor Hotel. Unfortunately the car was a diesel. Needless to say he didn’t get very far in it until we came out to drain and flush through the wrong fuel. He was very pleased that he hadn’t ruined his father’s car, but wasn’t so pleased that he was late for his rendezvous.

We’ve done quite a number of wrong fuel corrections, specifically on rental cars, at the London Biggin Hill Airport. We most commonly get diesel cars contaminated with petrol but do have the occasional diesel in a petrol car. We’ve even done a few water contamination vehicles.

One of the more recent jobs we did in Bromley was an old Chrysler Voyager that had been filled with petrol mistakenly instead of diesel. A lot of other fuel drain companies don’t like to do American-made cars due to the fact that a lot of the fuel system connections are difficult to handle if you don’t have the right tools. Fortunately all our engineers are equipped to deal with any vehicle and we never say no to a fuel drain.

There’s a Harvest petrol station on Bromley Common where we quite often attend misfueled vehicles. The ironic thing about this is that the petrol station is adjacent to a Vauxhall/Seat/Hyundai/Suzuki dealership and service centre. However, the reason that we get the work in this area is we don’t charge dealership prices. It also helps that our local engineers are nearby and can get on site fast.

We had a call from a lady who had put the wrong fuel in her car and broken down on Chelsfield Lane. We gave her a quote and an ETA of 30 minutes. She decided that she didn’t like our price and said she would call up the AA instead. Less than 5 minutes later she called back to book the fuel drain with us. Not only were we about 30% cheaper but we were also 2 hours quicker.

Call us for all your wrong fuel Bromley situations. 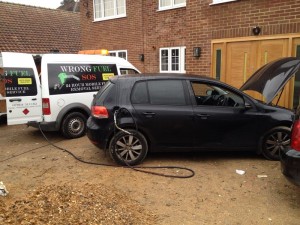 Fuel Drain on a VW Golf

Wrong Fuel London boasts comprehensive London coverage 24 hours a day and 7 days a week. We have mobile units ready to come to you to sort out any sort of contaminated fuel situation.

Our prices are very competitive and our call-out times are second to none.

All our technicians are fully trained and certified so you know your vehicle is in good hands.

*Calls may be recorded for quality and training purposes.