So, what’s the big deal with petrol in diesel?

Petrol in diesel is a subject that has a lot of opinion and quite a bit of controversy. There are many “old wives’ tales” about what you should do if you’ve put the wrong fuel, petrol in diesel, into your car.

We would like to supply you with information that is not based on opinion or guesswork. The information you will find below is based on the knowledge of real vehicle fuel system specialists who have a combined 50 years hands-on experience in dealing with misfueled vehicles. We know what we are talking about as this is our livelihood.

I’ve only put a small amount of wrong fuel in my car. Will it be alright to just top it up?

There are a lot of opinions on this. Some people say it’s no problem, others say there’s no chance. In fact there are probably as many correct answers to this as there are cars in the world. I’ve dealt with people who had more than 10% petrol in their diesel and they filled the vehicle up and never experienced a problem at all. However, we’ve also been called out to help stranded motorists who put less than 5% petrol in their diesel and the vehicle conked out. There are a lot of factors at play here – the age of the vehicle, the size of the fuel tank, the condition of the fuel system components, even the make and model, etc. I think I can best explain it with an analogy: Liken misfueling to taking drugs. Everyone reacts differently to drugs. Some people can have a small amount with no adverse effects. Other people can’t handle even the smallest amounts. Everyone will die if you give them too much.

Unfortunately there is no guarantee that the vehicle will be fine if you top it up. Having said that, if you only have 5 or 10% contamination you could very well be fine. In deciding whether or not to “top it up” it’s a bit like gambling. You need to balance the cost of a fuel drain with the possible cost of repairing/replacing damaged fuel system components. However, one piece of definite advice that we can give is, if your car is still under warranty, get it drained no matter how much wrong fuel you put in it. If, when it goes in for its next service they discover that there is contaminated fuel in the system, you will be facing a large bill because they will replace a lot of your fuel system components in order to keep the warranty valid.

I’ve filled up my diesel car with petrol and drove it until it conked out. Is it ruined?

It is very unlikely that you have ruined your car by misfueling and driving it. That said it’s not unheard of for a pump to fail, or an injector to get clogged. But, statistically speaking, of the more than 4,000 fuel drains we have done so far this year on run misfueled vehicles, less than 10 had sustained damaged necessitating a visit to a garage for repair (less than 0.25%). In the cases of damage the vehicles had generally been run continuously, long after the misfueling was known about, and the customers had tried to just “get away with it”.

I’ve misfueled my vehicle and the dealership has told me I need to replace almost the entire fuel system. Is this true?

If it’s not true why do people say it?

The answer to that is very simple – money. If you put petrol into your diesel Mercedes, for example, and take it in to the dealership you would likely be faced with a bill to the tune of thousands of pounds. Mercedes will say that because there is a possibility that some parts have become damaged (regardless of how remote that possibility is) they are no longer able to guarantee those parts. Therefore, in order for them to be able to maintain your warranty and continue to guarantee your engine parts they will need to replace them. Not only does this protect them from an unsatisfied customer suing when their engine fails it also makes them a tidy little sum of money.

A few months ago we did a fuel drain on a brand new Mercedes C Class. The customer had put petrol into it and then moved it from the pump to a parking bay at the petrol station. It was then recovered to the dealership and he was given a bill for £750 to drain the fuel out and £9,000 to replace the “damaged” engine parts. We attended the vehicle, drained it and cleaned it out for the customer for a tiny fraction of that amount. I spoke with the customer recently and he has had absolutely no problems with the vehicle at all. So, did he really need to have everything replaced? I leave that for you to decide.

What happens if I put petrol in my diesel car and what is the worst case scenario?

Diesel is a heavy oil. Not only is it a fuel but it is also a lubricant for the diesel engine fuel system. Modern diesel engines have a high-pressure pump just before the common rail which pressurises the fuel before it goes into the injectors. The high pressure pump is constantly under a lot of stress and is very hard working. If you reduce the lubrication of this pump you will find that it starts to wear. This will obviously damage the pump – but the bigger problem here is that small metal filings can pass down the fuel lines and get lodged in the injectors damaging them. Replacing a fuel pump is not a big issue, however, replacing an injector is a huge undertaking – one that is likely to be very costly due to the labour involved. Add to these problems the fact that petrol can deteriorate diesel fuel lines and seals. So, worst case scenario, a misfueling can cost anything between £5,000 and £9,000. Therefore it is always better to spend a few quid to get it drained than risk writing the vehicle off or having to fork out a small fortune.

Do you provide other vehicle services?

No. We are a specialist contaminated fuel removal service. However, if you are looking for vehicle locksmith services, check out Locksmith London for help.

Wrong Fuel is not a disaster. Call us and we’ll help sort it out. 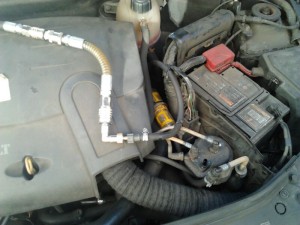 Wrong Fuel London boasts comprehensive London coverage 24 hours a day and 7 days a week. We have mobile units ready to come to you to sort out any sort of contaminated fuel situation.

Our prices are very competitive and our call-out times are second to none.

All our technicians are fully trained and certified so you know your vehicle is in good hands.

*Calls may be recorded for quality and training purposes.